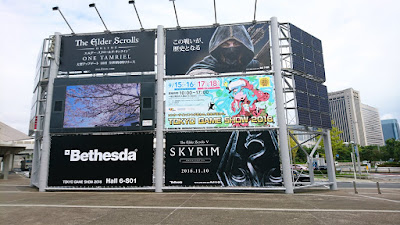 It’s been so long since the last post! The problem is, one does not simply feel how much time has passed unless he starts writing again. Doesn’t feel to assuring eh? But all that aside, today’s blog is a little bit different to what we normally post about. Though in the end, it’s game-related and – hopefully – educative and useful to the game developers out there.

So a few weeks ago, 2024 Studios was able to participate in the Tokyo Game Show with the game “Keys to Success” (yaaaaay!) and it was definitely an educative experience. Briefly, Tokyo Game Show (TGS) is – as stated by Wikipedia - “is a video game expo / convention held annually in September in the Makuhari Messe, in Chiba, Japan.” TGS is one of the biggest gaming events that takes place for 4 days; 2 business days and 2 public days. Since Egypt and primarily the Middle East doesn’t usually hold or organize such big events, we got to commit some numerous mistakes due to our inexperience. As noting them down for the future, we decided,” Why not share them with everyone else?” So in hopes it becomes useful to other developers, we have assembled some advice, dos and don’ts!

For starters, how do I get to showcase?
TGS opens submissions for indies who want to showcase their games in around May~June. They take their time filtering the submitted games and get back to the accepted teams by mid July to arrange exhibitors’ stuff. (renting/free and extra passes/etc..) TGS only offers indies the booths and passes, all the trip’s cost is the indies’ responsibility. In the submissions’ form, you also pick the days you want to show-case your game on.

Are the four days just for showcasing?
Well, yes and no. The first two days, the attendees are the press and the VIPs. Mainly the first 2 days are called “Business days”, where the exhibitors at TGS can set up business meetings if they will and discuss future co-operation plans and so forth. The remaining 2 days however are the “public days” where the event is open for the public and they’re basically the really really busy days. Nevertheless, in terms of showcasing, you do showcase your game during those 4 days (in case you submitted all 4 days as the desired days to showcase on in the application form)

So after submitting and getting accepted, now it’s time to prepare!

Prepare stuff to hand out in the event
As you showcase and people pass by, or even right at the entrance door, you’ll need to spread awareness about your entity’s and game’s presence, and it would be nice to add your location so people who get interested can actually stop by! (Okay cool, fliers, easy!) Note that I had said “Stuff”, not necessarily “fliers”. Fliers, though useful, are simply easy to dispose of. We don’t want that, do we?
As I walked around the TGS halls, I was able to see the kind of stuff that other companies were handing out (for free) that were actually hard to dispose of! (I even brought them home!)

Of course those weren’t all, there were also pins, pens, coins, plastic sunglasses, water bottles, headbands and a whole lot more! Sadly, some of the stuff I was able only to see with other people yet never knowing where they got it from. (*cries in a corner*)

For printed handouts, localize it into Japanese
Since it’s taking place in Japan, most of the attendees are Japanese – who can or cannot speak English. It would never hurt to prepare a Japanese version for your fliers and other stuff.

At least two people to attend the event
While a team gets 5 exhibitor passes (and they can pay for more), I alone got to travel to the show. As I have mentioned before, you get to showcase, meet with people, attend shows, do some business meetings, even get interviewed by the press; it’s a lot to do when you’re alone! (I never felt busier and more tired in my life). Moreover, when I was away attending meetings, the booth was left alone and unattended. Never mind the security problems, thank God there were none, but not being able to hand out the flier or show the gamers your game or even see/hear their feedback. It was hard, so yes, two people at least to take turns and make full use of the opportunity.

While you’re packing, make room for loud speakers
That was my biggest mistake, though originally I had prepared headsets for better engagement while players tried the game. The thing is, the whole place is crowded and it gets so loud and noisy, and the exhibitors will compete for the gamers’ attention for whoever gets noisier wins (GOSH some of the game themes are still playing in my head!) So you should proudly prove that you’re the noisiest fellow around, and work hard at it.

Arrange as much meetings as you can
One of the drawbacks of being solo on the trip was I couldn’t arrange many meetings because of having to attend the booth. The thing is, Tokyo Game Show provides a business website for exhibitors with a “meeting organization” system so you’d set up meetings with people/other companies way before the event. It’s very handy but needs lots of time, patience and endless browsing through the HUGE list of exhibitors.

Prepare a “Special demo”
By special, it means a demo that can act as a video player and a playable game. In other words, in case the game has been inactive for so long, the game should play a video/trailer of the game. When it becomes active again, the game switches to the playable demo (preferably reset as well) This would be very convenient so you wouldn’t have to switch between the game demo and the trailer to attract people when no one is playing then (there’s only room for one screen, you can’t use two screens to solve that problem)

While preparing the demo, make a “Japanese Controls” options
One of the most frustrating moments (actually more than once it did happen) would be Asian/Japanese players clicking “X” for cancel and “O” for confirm (I was raised with a PS controller with the opposite functionality) It’s mainly because in the Japanese language X (Batsu) means wrong and O (Maru) means correct. It was hard for them to get used to the type of controls and they would quit eventually (some couldn’t even start the game because they kept hitting O and all they got was “Would you wish to exit the game?”)

Still while preparing the demo, localize the game
Lots of people from many different places will gather in TGS, and some of them can’t speak English. It’s important to localize your game (at least to Japanese) for all the gamers to enjoy.

Pack some decorations
Preferably related to your game’s theme; that way it would be catchy and attract the players’ attention. There was a really really good booth that I thought its decorations was quite simple and easy and yet made the booth so catchy! 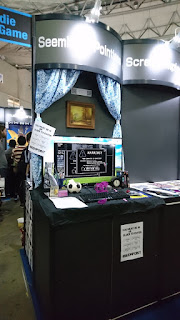 The game was apparently some kind of windows XP simulator during the 2000s, so the booth’s setup as a desktop was actually befitting.

Pack a small bag
It’s mainly to carry giveaways, business cards and water for you. It’s for when you move away from your booth and decide to distribute your fliers at the hall’s entrance or elsewhere. Don’t forget to place in the bag some small snacks as well in case you got tired, like chocolate or sweets.

When filling the renting application, rent a big screen
Or buy/get a stand to place your screen on it for everyone to see. When it gets crowded, your game might not be easy to spot/see. You can always pack your own screen if you want, but TGS offers renting 40+ inches screen.

Study some Japanese if you can/have time
Most of the attendees are Japanese, or Asians who can speak Japanese. Not all of them can speak English, which is quite frustrating. It was okay for me since I have been studying Japanese for 5 years now, but I can’t imagine how it would have been otherwise with the press, the players who can’t speak English, and the reviewers. Try to at least memorize the easy stuff, like good morning, or here you go, to use while distributing fliers. Japanese become friendlier when they hear you speaking Japanese.

Now that’s all about the preparations that you might need while you’re still home. Of course, preparing yourself mentally for the trip and the event is important as well!
The next step is to actually exhibit! Overwhelming it might feel at first, but you’ve got so far so don’t worry about a thing and just enjoy :) Next blog would be all about the dos and don’ts during the exhibition!

When working with unity and especially as the number of your scripts gets better, you start getting a lot of dependencies between scripts and you found the need to reference other scripts.
For example you have game manager for you global settings , and you find the need that your enemies script and audio manager and camera and so on wants to get reference to your game manager.
Ofcourse with unity it's easy , just make a public variable game manager and assign it in the editor but this might cause some problems over time:

Mostly you will have a lot of public variables in your editor that it will get messy and you need to assign it correctly every scene.what if the script is on perfab that you generate at run time ?
you will need to get the script on the instantiated game object and assign the variable to it in runtime.
-------------------------------- What if there's away to ease this process abit and lower our code coupling!
And actually there's a subject …
Read more

Last time we talked alittle about what advanced texture type is in Unity. This time I will go deeper into the types of texture compression. But before we jump in xD I just want to say that this post is meant as a basic entry guide to the big world of texture compression, which I'm still beginner at and I'm exploring it with you. So let me know your feedback and what you think! And again this isn't meant to be detailed explanation of every thing. - if you want more details, I will add references below.

All the textures compression discussed here you will find them in Unity "advanced texture type" , with more detailed names. In order to make it easy for you to understand these names, I will add a little section at the end for that :) .

Let's start with what the need for texture compression is for. For example, you can open any png image on your pc (let's say it's a 1024x1024 size) you will find it around 1mb that's not bad, right ?

Why you should use "Advanced texture type" more - Unity3D